God has created the planet earth beautifully, he has made all the creatures brilliantly, and to secure the survival of these creatures possible God has made water as a supporting unit of the living beings. Water is one of the most precious gifts of God, which has the potential to brighten up human life. Water is required for all the purposes, and hence this is the reason the areas where water is scarce suffers from lack of modernization and development. 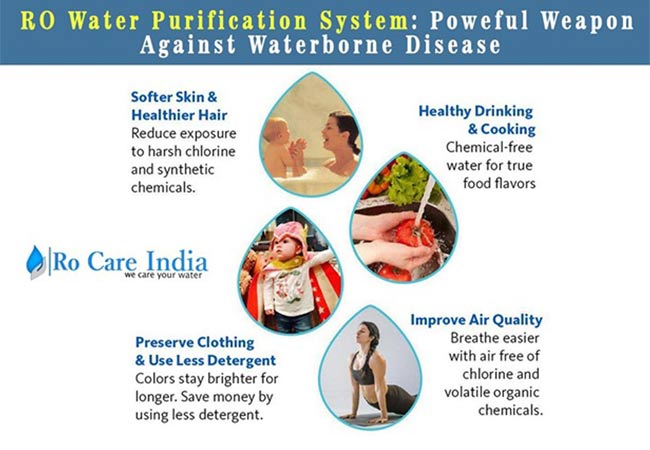 One of the significant worries of the present time is that; excessive use of water has caused a higher fall in the availability of freshwater. Though 75% of the total world area is covered with water, still there is a large population of human beings suffering from lack of drinking water. Industrialization is one of the major causes which has affected the water quality drastically. To get yourself safe and healthy drinking water, it is very much necessary to get a water purifier at your place. The RO water has several advantages over the normal water; the RO purification system has proven to be very useful in eliminating various kinds of harmful diseases.

After many types of research and studies, humans are made aware of the fact that there are a lot of waterborne diseases which are caused as a result of drinking contaminated water. As we see in our day to day life that the industries and household stuff pollute the large water carriers such as the lakes, oceans.  Water has the self-cleaning capacity, it is a liquid which has the potential to dilute any substance, but as we know everything has a limit, even this liquid has lost its characteristics of dilution due to the excessive load it is given. This is the reason why water is becoming intoxicant for the humans, some of the most harmful waterborne diseases which lead to the death of a large number of populations every year are as follow:

One of the common ailments caused by drinking unsafe water is cholera. It is created as a bacterial infection of the small intestine, which is a result of the transmission of harmful particles inside the body, which finds their way through the water. One of the primary causes of cholera is said to be the poor water condition of the municipal water, which is used for drinking by a large population.

Next in the list of most common diseases caused by drinking contaminated water is cryptosporidium. It spreads as a result of a parasitic infection of the small intestine. The only way to avoid getting attacked by this disease is by drinking healthy water.

It is also an intestinal disease which is caused by the attack on intestine by the parasites; these parasites get their way into the human body with the contaminated water. People who drink unclean water are more likely to become a victim of this disease.

Well getting an RO water purifier guarantees you from protecting you and your entire family from all the water-borne diseases which are caused by drinking contaminated water. The water purifier, which comes which RO functioned technology, has several other benefits in comparison to the standard water purifiers.

The term Ro is an abbreviated term of reverse osmosis; the RO process uses a partially permeable membrane which removes the ions, unwanted molecules and other unhealthy larger particles which are generally found in the running tap water. The RO water purification system delivers water to you in the healthiest way.

In the RO processes applied pressure is used which overcomes the osmotic pressure, a colligative property, which is driven by chemical differences of the solvent. Any unwanted chemical species, as well as natural elements (such as bacteria), can be moved out of the water with the help of reverse osmosis; this process is helpful not only to make the potable drinking water clean but it is also used in the industrial processes.

During the process of filtration through the RO the solute which is found in the water remains on the pressurized side of the membrane and the solvent i.e., the pure water is moved out to the other side.

The water molecules containing salts and other effluent materials are quickly thrown out of the water through the RO water purification system. The standard osmosis process fails to treat the hard water, but the RO process has the potential to remove lead, mercury, fluoride, chlorine, arsenic, etc. from the hard water.

It is also known for eliminating cryptosporidium present in the lakes. Every minute, unwanted particles present in the drinking water can be a significant threat to your health. So be wise enough to choose the best RO water purifier to protect your family from the waterborne diseases.